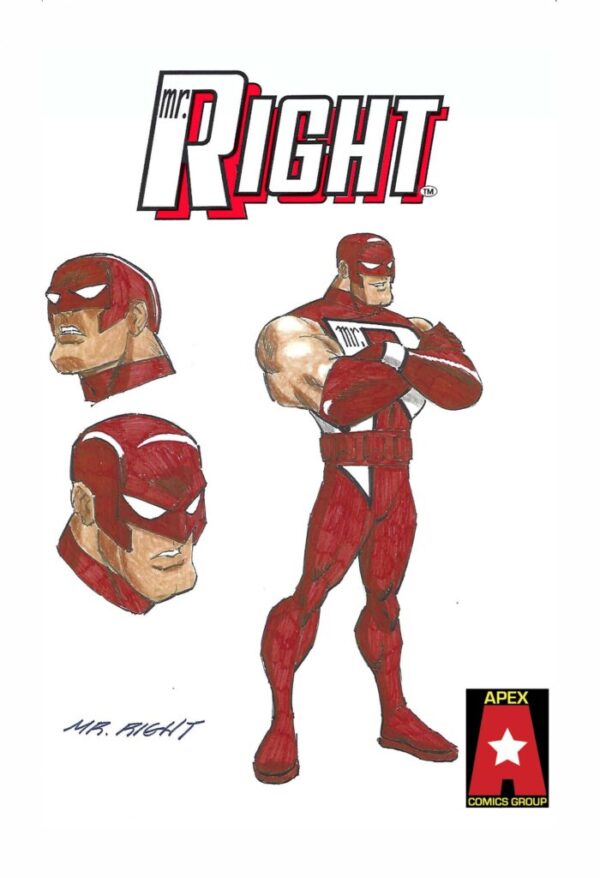 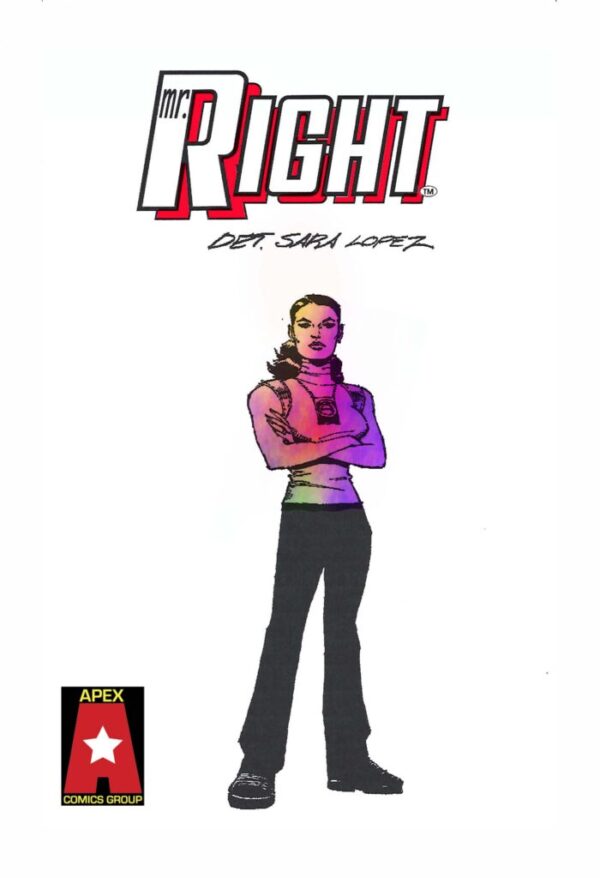 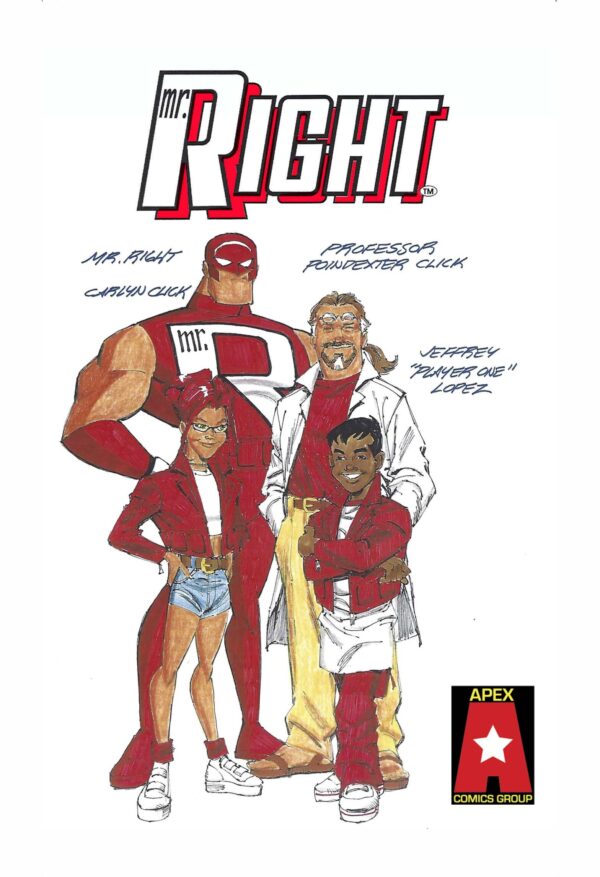 At last! A super-hero for anyone who sincerely loves super-heroes. A teenage video-gamer joins a digital daredevil for truth, justice and a universe of Hoo-HA action & angst. While attempting to develop a new technology that allows computer constructs to assume physical mass, Doctor Dex Click stumbles upon the new champ of split-second adventure. But Mr. Right is little more than a soulless animatronic until he bonds with Jeffrey “Player One” Lopez. Since Jeffrey is a true believer, he helps transform Mr. Right into the hero who lives within us all. A comic book in the mode of DeFalco & Frenz’s Spider-Girl, Spider-Man, Thor, Thunderstrike and A-Next!

A Message from the Artist
Apex Comics Group is incredibly fortunate to have Tom, Ron and Sal aboard to helm the creative direction for Mr. Right. As a lifelong fan of their work, I can’t wait for the world to see the new adventures they have dreamed up!” stated Mariano Nicieza, Apex Comics Group president

Mr. Right is led by Mr. DeFalco, who was Marvel’s 10th editor-in-chief. During his tenure, the company had the most successful fiscal and creative years in its entire eight-decade history. Mr. DeFalco was a driving force innovating the entire Marvel Universe with creative concepts used to this day in the Marvel Cinematic Universe. He also worked closely with the toy manufacturer Hasbro in the 1980s, heading the creative team that produced the backstory and dossiers that served as the basis for the relaunch of the phenomenally successful G.I. Joe toy line and animated television show. Mr. DeFalco is the author of dozens of graphic novels and hundreds of comic book stories, including The Amazing Spider-Man, Fantastic Four, Thor, Justice League of America, Archie, Scooby-Doo and Dazzler, and, with artist Ron Frenz, created New Warriors and Spider-Girl.

Mr. DeFalco has personally created and developed over three dozen characters that have been licensed for television, toys, T-shirts, posters, trading cards and other merchandise, and he has written Khan and The Phantom for Moonstone Books. In 1990, he won a Comic-Con International’s Inkpot Award, given to individuals for their contributions to the worlds of comics, science fiction/fantasy, film, television, animation and fandom services.

Renowned artist, penciler and inker Sal Buscema has been a fixture in the comic book industry for almost 60 years, primarily with Marvel, where he spent long runs as artist of The Avengers, The Defenders and The Incredible Hulk. Starting in the industry shortly after graduating high school in 1955, Sal Buscema went on to work in a number of ventures, including the military as an illustrator and later with his brother, famed comic book artist, John Buscema. With industry credits too long to list, he pencilled and mostly inked a 100-issue run on The Spectacular Spider-Man from 1988 to 1996. Sal Buscema’s DC Comics artwork contributions include Action Comics, Batman, Catwoman, Detective Comics, Green Arrow, Superboy, Superman and Wonder Woman, among others. For Marvel, his contributions include The Amazing Spider-Man, The Avengers, Battlestar Galactica, Captain America, Daredevil, Doctor Strange, Ghost Rider, Iron Man, Master of Kung Fu, Silver Surfer, She-Hulk, Rom, Thor, X-Men and many others. Sal Buscema has collaborated on numerous occasions with both Mr. Frenz and Mr. DeFalco.

Sal Buscema received the Inkpot Award in 2003 and the Hero Initiative Lifetime Achievement Award in September, 2013, at the Baltimore Comic-Con. In 2013, he received the Inkwell Awards’ S.P.A.M.I. (favourite small press and mainstream — independent) Award for his work on such titles as G.I. Joe Annual and Dungeons and Dragons: Forgotten Realms. In 2018, he was awarded the Inkwell Awards’ S.P.A.M.I. Award again, for his work on Rom.